For information and registration, fill in the following details:
פקולטה לביולוגיה Biology Faculty > News > The winner of Aug’ 21 PAPER OF THE MONTH is our former doctoral student Michal Ackerman-Lavert from Prof. Sigal Savaldi-Goldstein laboratory

The winner of Aug’ 21 PAPER OF THE MONTH is our former doctoral student Michal Ackerman-Lavert from Prof. Sigal Savaldi-Goldstein laboratory

SPOTLIGHT ON RESEARCH
PAPER OF THE MONTH AUG 21

The Committee for Graduate Studies in the Faculty of Biology selects each month the leading scientific article from all the scientific articles published for that month. We are pleased to announce that the winner of this August’s article is our previous doctoral student Michal Ackerman-Lavert from Professors Sigal Savaldi-Goldstein laboratory, whose article was published in Current Biology. On the occasion of the win, we asked Michal to provide us with some interesting details about the study, the path that led to the research it and also a bit about herself.

Hi Michal, could you introduce yourself in a few words?
My name is Michal Ackerman-Lavert, I’m 32 years old, I live in the Jezreel Valley. I finished my Ph.D. last August.

Could you explain what Professor Savaldi-Goldstein’s laboratory is about?
Savaldi-Goldstein Laboratory uses plants as a model system for developmental research. Unlike animals, plants produce new organs and modulate their growth throughout their life span. This ability depends on the function of meristems that serve as a source (similar to “stem cells”) that supplies new cells of different identities to the growing plant. What are the mechanisms that maintain the function of the meristem and its structure, is one of several key questions studied in the lab. By focusing on the roots of the model plant Arabidopsis, the lab made new discoveries, such as the findings in my doctoral research. 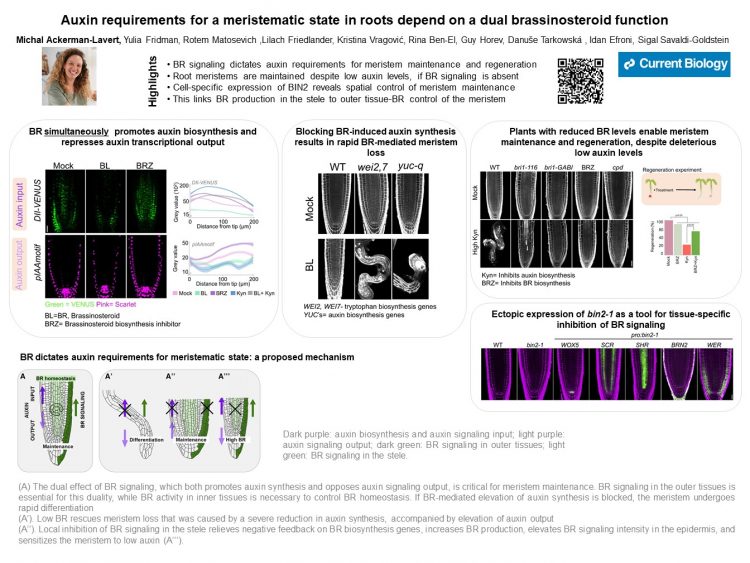 Tell us about your current article/research, what was the main purpose of the research, and what did you discover?
The organization and maintenance of the root meristem depend on the interactions between hormonal signaling pathways, including hormones called brassinosteroids (BR) and auxin. Previous works have reported that BR signaling has a positive effect on the auxin input (sensing) in the meristem, while other works have reported inhibition of the auxin signaling output. Do these molecular interactions point to a contradiction between different studies? Or alternatively, does this discrepancy actually occur and if so, what is the significance of these interactions for root meristem function?

In this work, I showed that there is a dual effect of BR on auxin. That is, at the same time, BR enhances the production of auxin (a positive effect on hormone input) but simultaneously inhibits the auxin signaling output. Importantly and interestingly, this “contradiction” is essential to the very existence of the root meristem.

We further asked, is BR activity and its dual effect necessary in all the cell types that compose the meristem? Or is there a tissue-specific control? To answer this question, I used the BIN2 gene as a “tool” for selective inhibition of the BR signaling pathway in cells and tissues with different identities in the meristem. This is performed by expressing the BIN2 gene under various promoters and thus creating a wide collection of transgenic plants. The results I obtained were surprising, since the use of this tool resulted in root meristems of different shapes (phenotypes), depending on the identity of the tissue in which I interfered with the signaling.

For example, inhibition of the BR signaling pathway in the outermost root tissues (i.e., by specific expression of BIN2 in the epidermis and the root cap) resulted in meristem morphologies reminiscent of mutants with no functional BR pathway. By contrast, a similar inhibition in the innermost tissues resulted in an opposite meristematic phenotype, reminiscent of a plant exposed to high levels of the hormone.

In addition, using this same “tool” of selective expression of BIN2, I found that the  BR signaling in the internal tissues plays an important role in ensuring optimal BR hormone levels for meristem function. Furthermore, I was able to show that BR production in the inner tissue, allows hormone sensing in the outer tissue.

In conclusion, in this paper, I present ample evidence for spatiotemporal control and coordination between distinct tissue types in the root meristem. Also, I show how the quantitative ratio between the two hormones, auxin, and BR, rather than their absolute levels, is important for maintaining a meristematic state.

Can you tell us a little about the work process / how long did it take to work on the current study? Do you start an article when you know where you want to go? What happens next (corona, unplanned disturbances, how does it affect things?
The work process is very dynamic, usually, Sigal and I think about a result of an experiment that interests us, and try to raise hypotheses, what could be the cause of this phenomenon, or how the results of the experiment could be explained in more depth. From there we think about how to test the hypothesis, which experiment would help us moving one step further … Many times, great ideas for experiments or the use of certain methods come from conversations with colleagues and lab members during a coffee break…

What drew you to the current lab/project?
In my master’s degree, at the Faculty of Agriculture, Hebrew University, I studied the development of young fruits in apple trees and deepened my knowledge of plant hormones and their role in development. To delve deeper into the subject, I was looking for a lab where there is advanced molecular research in model plants – like Arabidopsis, and I wanted to learn more about the signal transduction of hormones and combine that with developmental research. The Savaldi-Goldstein lab is studying the steroid hormone brassinosteroid and its role in the development and this intrigued me, and particularly my project, which allowed me to deepen my understanding in hormonal signaling interactions, and their importance to root development.

What are your plans for the future of your career?
I completed my Ph.D. in August and joined the Northern R&D- Migal (Mop Zafon) as a postdoctoral fellow. My research focuses on deciduous fruit trees, including apple and cherry. Northern R&D is an agricultural research institution, the purpose of which is to conduct applied scientific research for farmers, in order to solve the problems that arise from the field, to improve agricultural crops.

A tip for a Biology student who started this year?
Choose a research topic that interests you, and do not compromise on it … this is the only way to survive, despite the difficulties.