For information and registration, fill in the following details:
פקולטה לביולוגיה Biology Faculty > News > From Darwin to sexual selection by Shahar Lavid and Prof. Benjamin Podbilewicz, Faculty of Biology Technion

From Darwin to sexual selection by Shahar Lavid and Prof. Benjamin Podbilewicz, Faculty of Biology Technion

Today, December 12th, we celebrate the birthday of Sir Charles Darwin, one of the most influential figures in the history of science. Published in 1859, his book ‘On the Origin of Species’, presented a revolutionary answer to one of the most fundamental questions preoccupying naturalists for centuries – how do novel species arise in nature?

Darwin was the first to introduce a dynamic mechanism providing a coherent explanation for the formation of new species – the principle of Natural Selection driving a gradual evolution [1]. This novel concept involves several aspects:  inheritance of traits and the fitness associated with them; variance within a population; and the presence of an external pressure affecting survival [2].

In the following book, published over a decade later, Darwin delved into the topic of sexual selection as a distinct form of natural selection [3]. While Darwin based his ideas on a primarily male-specific advantage in mating which is transferred to male offspring, the concept has since been broadened to encompass all aspects of mating fitness, in all levels of biology from the behavioral to the molecular [4].

During fertilization itself, the interaction between gametes, such as sperm and egg, can be the deciding step in reproduction. Specifically, the fusion between gametes requires specialized proteins termed “fusogens”. In recent decades, severals fusogen have been discovered, some related to sexual reproduction and others involved in the fusion of non-gamete (somatic) cells [5]. Furthermore, many somatic and sexual fusogens can be clustered into a family of structurally related proteins called “fusexins”, widely distributed among viruses, animals, plants, and some protists [6]. Their remarkable distribution in different phyla naturally raises the evolutionary question of their origin, extending from viruses to animals and plants [7].

In addition to their presence in plants [6], recent findings of fusexins in archaea [7] may imply a connection between prokaryotic membrane fusogens and eukaryotic gamete fusogens. While this could mark a common ancestor to many fusogens, it could also arise by species-to-species ‘hijacking’ of the fusexins genes. It is even possible that fusexins first allowed horizontal gene transfer by assisting viral entry into host cells and have since evolved to play a critical role in eukaryotic gamete fusion and merger [7].

These findings and many others continue Darwin’s path to discovering the various stages of evolutionary development. Ranging from the origin of gamete fusion and eukaryotes to the sustainability of ecological systems, the theory of evolution continues to provide a framework through which scientists study developmental processes. 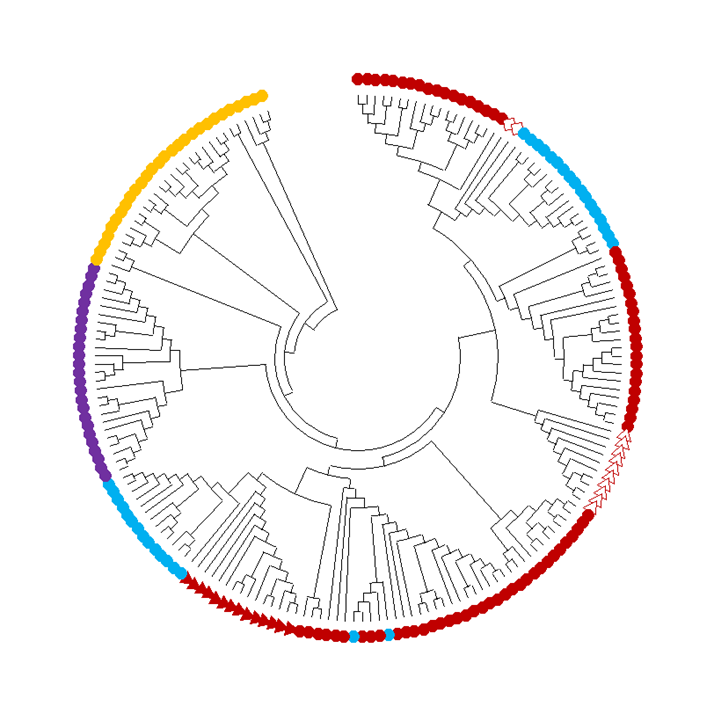 Figure 1: A phylogenetic tree describes evolution based on a difference in the genome sequence, for a subfamily belonging to fusexins. A tree that shows the genetic connections between fusion proteins from the FF family, which is part of the superfamily fusexins, and was first characterized in the nematode Caenorhabditis elegans. Red, light blue, purple: various proteins in Nematodes: Rhabditida order (red), Strongylida order (blue); Enoplea class (purple); Orange: FF proteins from other phyla